Written by
Lyndsey
Posted in
How it's made
Tagged
earrings, flowers, silver, sterling
Comments
1 Comment 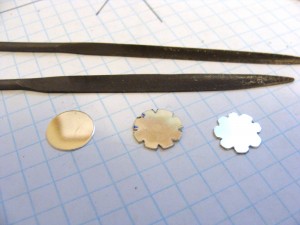 These earrings are one of my best selling items. Dainty sterling silver flowers, completely hand made by me. I’m not sure many people are actually aware of how much work goes into making these. There are a lot of steps involved, and the first step, the shaping of the flower petals, is by far the most time consuming step. It is possible to purchase “blanks” that are already machine cut into flower shapes. But that would give me less options as far as size and number of petals. It also takes some of the fun out of it, and reduces the handmade value I hold dear.

I start with sterling silver discs (or, from sheet, which I cut into discs) and, using a small file, I notch them and shape each petal. Some petals come out a little bigger than others… that’s the nature of handmade work… and it’s also the nature of “nature”. 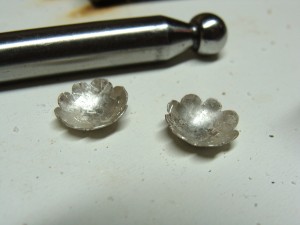 The discs have to be domed. Fortunately, there’s an easy tool for that! I go through various sized doming punches to get the shape that I want. There’s a hammering step before this one, where I put a bit of a texture on the petals. 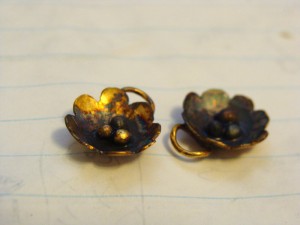 This is what they look like a few steps later… they’ve been cleaned up, pickled, cleaned up some more, and dipped in liver of sulfur to blacken them. The next step is to remove most of the patina, leaving a darkened look in the recesses, and an overall slightly time-worn appearance. I’ve skipped over showing you a few steps – I didn’t show you the itty bitty silver balls that I make, and solder into the centre of the flower, nor did I show you the attaching of the loop on the back to hang the flowers from earwires. 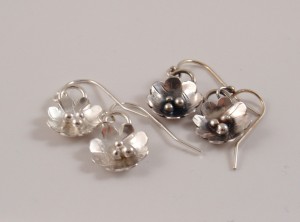 I also make these in a shiny finish, where I skip the patina, and do some extra polishing.

My husband lost his wedding band many years ago, and had been tanning his ring finger ever since. He was never much of a ring wearer, and wasn’t particularly fond of his wedding ring because it had a flat section that was supposed to sit front and centre – but it always shifted on him. He loved the idea of a new ring made by me – as long as it wasn’t too wide, and as long as it was the same all the way around, so it wouldn’t matter if it moved around on his finger. 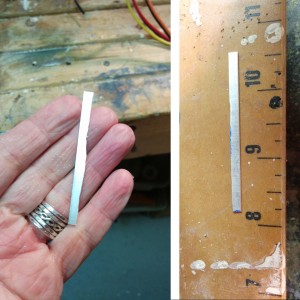 We settled on a banded ring design with a hammered, antiqued finish – something that would look best when it wasn’t all shiny and polished, because he works a lot with his hands.

I made this ring quite a while ago, when my sawing skills weren’t well practiced. Bit of a crooked line there, but I fixed that up no problem with a lot of filing and sanding. 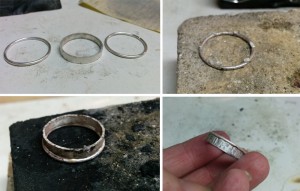 The second photo is a composite of photos that shows the 3 components of the ring… a flat, textured band for the middle component, with 2 narrow round bands for the outer edges, along with some pictures of the process of getting one of the outer bands soldered to the middle band.

I’d never done anything like this before, so it was a challenge to get the outer bands just the right size to fit with the middle component. But a bit of textured hammering on the outer bands saved the day – metal stretches a bit when you hammer it. Plus, the texture was going to work well with the purposeful aged look of the ring. 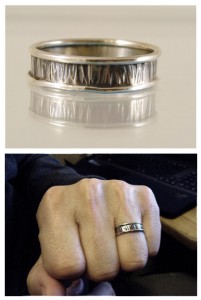 The other tricky part about soldering on the 2 outer bands was getting them totally centered on the middle band. Things tend to shift a bit when you’re soldering.

When the soldering steps were complete, there was a big clean-up step. Lots of polishing. It looked rather nice shiny. But of course, that wasn’t the look I was going for. The next step was to apply a liver of sulfur patina, which darkens it. Darkens the whole ring to a near black, which I then had to polish off, leaving the patina in just the nooks and crannies.

Here’s the finished ring. He loves it. And I love that he loves it.

Sterling silver has a lovely glow, but we’ve probably all experienced pulling a favourite sterling silver item out of our jewelry box, only to discover it has tarnished. But the good news is, it can be polished up with no harm done. Special care is needed with  intentionally oxidized or patinated finishes (but more on those in a moment). Because sterling silver is the same material right to the core, you can polish away without worrying about all the silver coming off (as it would with a plated item).

Before we talk about preventing it and removing it, it’s good to understand what it is. Tarnish is the darkening of some metals when a chemical change occurs on the surface. Tarnish ranges in color from a yellowy-gold to absolute black. It can happen when silver (or brass, copper, aluminum and some other metals) come in contact with air, moisture or certain chemicals. It’s not actually the silver that is tarnishing: it’s the copper that’s in the sterling silver (which is an alloy of 92.5% pure silver, and 7.5% other metals, predominantly copper).  Higher content silvers, like fine silver, which is 99.9% pure silver, tarnish more slowly, if at all.

If your item is just silver (no gemstones or pearls), and doesn’t have an intentional  dark oxidization or patina in the crevices, you can clean your item a number of ways:

If your item includes gemstones, pearls or intentional oxidation: